At 6 am, when I wake up, the dark mountains are so close to my window I can reach out and almost touch them. It’s magical. The sunrays have begun to creep down the mountainside, making the peaks look inverted buttescotch and vanilla cones. G is down on the drive way, doing Tai-Chi much to the consternation of the mountain folk who are watching her, mesmerised. M has managed to sleep only after ODing on Benadryl. Keylong is not commercial, and has breathtaking views of unspoiled mountainside. I vow silently to return. Next month, the road will be shut and this town will be snowbound till the summer. The rivers freeze and bridges are dismantled to prevent reckless and dangerous crossings. Beyond Keylong, the Bhaga river accompanies the road up towards its source, passing Jespa and Gemar villages. At Gemar, you see a HUGE sign telling you this is the last STD booth till Leh, but then 30 mns later you will find the last one is actually at Jespa. I make a note to come again some day to Keylong, walk down to Jespa and camp there by the white pebbled river bank.

We reach Darcha, the last permanent human settlement one will see for a while and sign in at the police checkpost. As per my map, there are more fancy names along the way, but like most places in the area, turn out to be just shanties or checkposts. Patsio is an army base, Zing Zing Bar- a depot,  Kilan Sarai, a two shanty depot with army jawans sitting outside talking. They stop and stare eagerly as we drive past, stuck in the middle of nowhere. I wave, they stare, wave back slowly. I see a rock with `GV Reddy’ and SV Rao’ painted on it and wonder at the homesickness they must feel, so far from the green rice fields of South India.

The road winds up to BaraLa chala pass ( 16,050 feet )which is unqiue because it is a tri-junction, with a trail from Spiti coming in from the South-East. BaraLachala means “Cross Roads Pass ” and this is the crossing of the Great Himalayas, the watershed between the Indus and the Chenab. We stop and eat aloo parathas packed at Keylong in the morning.The barren landscape becomes lunar. Dusty plains dotted with scattered boulders stretch into the distance and the afternoon sun beats down mercilessly. We pass an icy stream and fill up our Bisleri bottles for bathroom stops. It is hot and the gnarled mountains are rocky fingers stretching up into the sky.The gray slate of Lahaul has given way to dust, sand and striated stone. Its all flatland and we reach Sarchu at 3 pm. Sarchu is a popular night halt, with tent camps.You are not allowed to drive post 6 pm, and we still have time, so we decide to spend the night at Pang, and drive the remaining 77 kms while day light still exists.

The landscape has changed along the way to sand and pebbles. We drive past the river and a long stretch of what I think are sand sculptures.The forms are so distinct, we think they were made by man, but its the wind, eating into the dunes for miles in perfect symmetry. Its a bit eerie at dusk. Soon we start climbing up through the Zanskar range and I am nose to nose with mountain peaks.I can see caves and rock falls and towering sand dunes on the other side. Mckenna’s Gold sets.I am dumbstruck.No pictures or travel sites have prepared me for this.I am awed as we drive through, yes THROUGH the summit, where the road cuts into it and we are at Lachlung La Pass ( 16,600 ft/5059 m) a fantasy world of sand and stone.

To get to Lachlung La, you have to attempt the Gator Loops, an incredible 20 km of hairpin bends that encase the precarious mountainside with one loop concealed from the next so you feel like to will drive off the mountainside as there’s no where in front to go. Its the Utah plains and Grand Canyon merged into one here. We drive though deep stone gorges. Exactly three hours later we are at Pang.

The second jeep has caught up with us now, I is not well and has been throwing up because of the altitude. S decides to try and pitch his tent further up and they leave me and G in the tent camp, promising to be back in 10 mns. We make ourselves comfortable.G gets mistaken for the tent owner, by a French couple who walk in and give her the dinner order, and she responds promptly by pouring out the batter with a straight face into the frying pan to make ghee omlettes and chappatis. The Ladakhi tent owner arrives back to find a total stranger cooking in her kitchen.Truckers roll in for the night. The temperature starts to dip and we are shaking with cold. 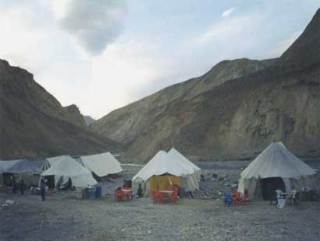 No sign of our fellow travellers. Our warm clothes are in the car. They arrive an hour later and heated words are exchanged because we are freezing. Their tent has blown away, so we unpack sleeping bags and roll in. Its 32/- for a body space on the carpet. One shot of cognac to warm us up and G is teaching the Ladakhi children games. We eat simple Aloo palak, with rotis and daal and bed down for the night. I cannot breathe.We are at 13,000 feet and my head hurts. If you dehydrate, you need to drink water, but if you head out of the tent to the loo, you will freeze. Catch 22. No one moves. I can hear G uncorking her water bottle in the dark, but I have no courage to brave the freezing cold outside. A has fever and the rigours, so we try and keep him warm. We sleep at 3 am.