>A walk down Avenue Road

It is difficult not to notice the ancient temple right at the beginning  of Avenue Road near the Mysore Bank Circle.  And yet thousands of people probably ride past it each day, not knowing that it is called the Yelahanka Gate Anjaneyaswamy Temple, said to have been built over one of the nine gates (the north facing Yelahanka Gate) that led into the mud fort built by 16th century chieftain Kempegowda I.  Layers of paint daubed on over the years and much pollution that has settled in its niches have played a key role in disguising its true nature and finer details.

It’s almost noon and what started off as a cool morning has turned out to be a sweltering day. I walk past the rows of hawkers on the pavements selling stickers and second hand computer text books, semi-precious stones, talismans and what not. They refuse to let me take pictures. I think they are worried they might be caught by the Muncipality who comes down heavily on pavement businesses very once in a while. Only every once in a while. I walk past the Rice Memorial Church painted in the popular red and white seen all over Bangalore. I am thinking of starting a hunt for more red and white buildings in town and  immediately come up with quite a few. Why red and white, I wonder ?

Anyway, back to the church that was dedicated to Benjamin Holt Rice, a missionary from the London Mission Society and father of noted epigraphist BL Rice, author of the ‘ Epigraphica Carnatica ‘. It was ( Time Out, Feb 4-17th, 2011 ) ` a twelve volume series containing studies of approximately 9000 inscriptions from copper plates and rock surfaces which Rice collected during his travels across South India.’ He was also the first Director of Public Instruction in Mysore and published three Gazetteer volumes ( Two Mysore and one Coorg )  in 1877-78, two of which he revised twenty years later.

The volumes contained information on physical geography, flora, fauna, ethnography, history, religion, language, art and industry and administration, alongside maps and pictures. His pioneering effort was recorded  in glowing words by William Wilson Hunter in his preface to the First volume of the Imperial Gazetteer in 1881 as ” “better than anything he himself had been able to do even for Bengal”. I decide to read more…

I am told Rice was married to Mary Sophia Garret, the daughter of Reverend Garret who built the Bangalore Palace ( they probably met in Bangalore ). They had ten children and lived happily in a large, beautiful old bungalow on Sankey Road, opposite the current Windsor Manor Hotel. He was also the part-time Director of the Department of Archaeology and fluent in Kannada, Sanskrit, Tamil and Grantha ! In 1891, Rice also made the earliest discovery of Roman coins in Karnataka and the original collection in the The Bangalore Art Museum belonged to him.  It is no wonder then that Thomas Town in Bangalore has been called BL Rice Nagar.

Incidentally, Roman coins belonging to the rule of Augustus, Tiberius and Claudius were also discovered in HAL and Yeshwantpur, probably dating back to when the Romans traded with India during the Satavahana  reign, travelling further inland from Kaveripumpattinam in Tamil Nadu. An abundance of coins found all over the South indicates that this was a flourishing connection.

I’m so lost in my flights of fancy that I don’t hear any of the frantic honking, cursing and shouting that usually goes on all around me on Avenue Road. But if even my ears are on pause, my eyes aren’t. And I am so glad for that because tucked away in a corner, squashed in between two ugly buildings is this pearl – the Chintalapalli Venkatamuniah Settys Free Boarding Hostel and Choultry ( 1914 ). The Choultry downstairs is now a Bank but I am so tempted to walk up the stairs and meet the current residents of this once upon a time free hostel. But I have a long road to walk so I vow to pop in another day. 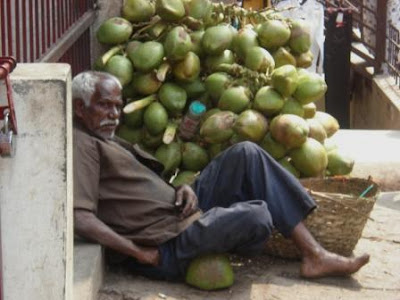 Avenue Road is truly perplexing. There’s business on the streets.There’s business in the stores lining the streets and there’s business in the tiny lanes and bylanes of the gullies leading away from the stores that line the streets. On the road, there’s everything. Food, fruits, fake jewellery, towels, books, plastic bags, hangers, safety pins, metal idols…there’s so much going on that I had to write one more post about this walk !  There are just so many, many, many people. I inhale deeply and think to myself ” now this is what I call a bazaar ! ” A wonderful route to map for ` The great Indian experience ‘.

I walk on past the Dargah of Manik Mastan  Saheb ( RA ) on my right , past the `pansari ki dukans ‘ , Unani shops manned by venerable gentlemen with white caps and hennaed beards, dry fruit stalls, shops with sacks full of exotic `jadi-booti’ and healing herbs emanating strange scents, only to arrive at the Dargah of Hazrat Syed Pasha Shaheed at the end of the road, near the flyover.

More paint here as well. This time it is green and gilded gold. The Dargah opens out onto the main road and there are women and sleepy children sitting inside, while the men stand chatting casually outside. I don’t see anyone sitting solemnly, lost in spiritual contemplation here and find the idea of the Saint lying there peacefully while the world continues to turn around him, quite compelling.

The Dargah is also called `the Lock and Key Dargah’ because this where people come to make affirmations, lock away their troubles and leave them behind for ever. That’s a nice thing to believe in, isn’t it ? If our hearts could let go as easily as our hands that turn the key, life would be simple. Happy even. Nevertheless, faith and belief in the power of sacred gestures run high in our country. Wherever you go, there is a coconut to break, a garland to be hung, a flower to be offered, incense to be lit, a candle to be burnt, a bell to be rung. India is a country that has very poor people who are very rich in this wonderful quality called faith.  Faith, in the powers that we elect and in the higher powers that be. Atleast in the case of the latter, we can be sure that someone is listening.

Yes, faith is everywhere in India. So is God. Where else in the world I wonder, would I walk in one straight line down a road that begins with a temple at one end, has a church in the middle and a dargah at the other  ?