>The Jamia Masjid. A portrait in Sepia 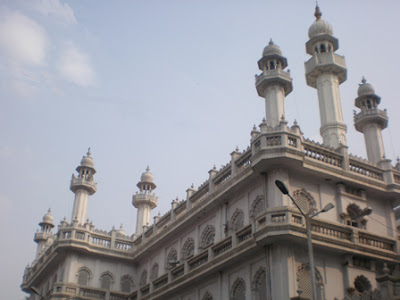 The Jamia Masjid stands at the end of the Silver Jubilee Park, a little before Avenue Road, near the Mysore Road Flyover. It is an imposing five storied building. When I say imposing, I do not mean intimidating. No, it is anything but that. With its delicatee jaliwork, white Rajasthan marble exterior, proportionate arches and fragile minarets, it soars into the sky, its beauty defiantly challenging the ungainly Flyover next door. 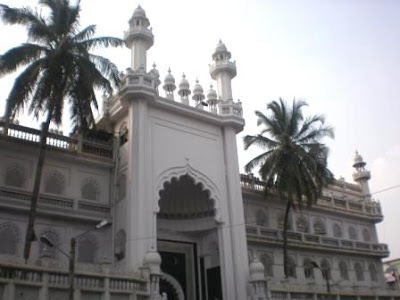 It is said to have been designed by Rayyaz Asifuddin from Hyderabad, and the foundation stone was laid by the then Diwan of Mysore, Sir Mirza Ismail in 1940. Despite being built only in the last century, the Saracenic mosque has a beautiful air of timelessness about it. Standing inside, you see pigeons flutter and coo from the pigeon holes in the twin minarets that extend way above the bulbous ( onion) domes high up into the sky. The ablution pool for the traditional `wazzu’ before prayers is in the centre of the mosque. Water bodies bring calm serenity and a reflective quality to any space and the same seems to apply here. It is indeed a place of prayer.
As I stood there, I heard a school bell ring and was suddenly surrounded by noisy little chattering children in school uniforms, rushing to their buses . They seemed to have come out of nowhere. I then realised that this deluge of cheerful, excited, under age humanity had risen from the basement, where the Masjid runs an English medium school. 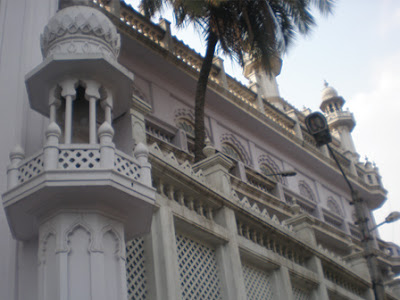 This City Market mosque is dedicated to Tipu Sultan and each year it is the site of an Urs on his death anniversary ( said to be May 4th, 1799 ).  Usually, the Urs is a commemoration held in the memory of Sufi Saints at their Dargahs (shrines / burial sites ) and all are welcome irrespective of caste or creed. It is not to be confused with the Jumma Masjid (Shivajinagar) which was built in the early 1800’s or the Sangeen Jama Masjid (Cubbonpete) that is considered to be the oldest surviving mosque in Bangalore.  There is also a School of Calligraphy here, where maybe one day, artists, illustrators and font designers may step in and take the beautiful Urdu script back out into the world.

← >In search of a Sacred Space
Cubbon Park, where the living is easy… →