We are standing outside a decrepit building in Gandhi Bazaar amidst the marigold, raw mango and pumpkin stalls on the footpath. On the building is a signboard that says “Kollapuri’s”.  I have heard much about this famous eatery.Locals say it is a must visit for meat lovers.  Soon I am chatting with KR Vinayaka, the proprietor. He tells me that his father, Kollapuri Ramusa migrated to Bangalore over twenty years ago and set up this small restaurant in the heart of a traditional South Indian domain – Basavanagudi. Surprisingly, there seem to be more than enough non- vegetarian loyalists out here because the place is full. So we wait.

Almost possible to miss if you are not careful

Kolhapuri Ramusa (his photo is up on the wall here) came from a town that was a hotbed of film activity in the twenties, producing legendary names like Baburao (Mistry) Painter, Bhalji Pendharker and V Shantaram, as well films such as Raja Harishchandra, (the first feature  film ever to be produced in India by Dadasaheb Phalke in 1913) and Ayodhyache Raja.  Other than the obvious associations (footwear etc) Kolhapur had great historical significance and was where a battle was fought in 1659 between Shivaji and Rustom- e – Zaman, a General in the Bijapur Sultan’s army.

KR Vinayaka informs us that a table is finally available and so six people squeeze into seating meant for four. The menu card tells me that my friends were right. There is no place for leaf eaters or even semi-leaf eaters (like me ) in this marvellous world of Chicken curries, spicy Kheema, Liver masala, Sukka Mutton Fry, Biriyani and others of the same kin. “No vegetarian ?” we ask. The waiter beams and sticks his finger on an `item’ called `plain biriyani’. “Only rice. No pieces !” he says, anddemonstrates a `pick and chuck’ just in case we  haven’t got it! So the vegetarian among us end up with the `plain’ biriyani, and we choose the Egg Biriyani and Chicken Curry with chappati’s. 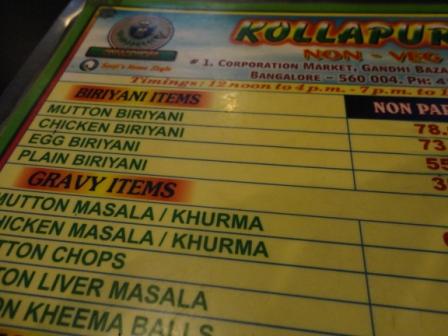 The menu is fairly meaty !

The Chicken curry arrives quickly and is terrifyingly red. The only reassuring factor is that these famous Kolhapuri mutton`Taambda Rassa’s (tambda meaning red) are made with the special Byadgi chillies which `provide the colour, without the necessary fire’. But isn’t most Kolhapuri cuisine fiery anyway ? Speaking of fire makes me think of Tara Bai. Tara Bai  (b. 1675 ) was Shivaji’s fiesty daughter-in-law and his son Rajaram’s widow who struggled briefly with Shahuji over Maratha leadership. She captured the fortress of Panhala in 1710, took her son Shivaji II to Kolhapur, set up her capital there and threw herself into the ongoing skirmishes between the Marathas and the Mughals with great gusto. This self confessed militant lady, “they say I am a quarrelsome woman ” was the beautiful daughter of Hambir Rao ( Hansaji) Mohite, a Maratha general (Sarsenapati) and brother of the equally volatile and beautiful strategist, Soyarabai who was Shivaji’s wife and Rajaram’s mother (she was executed by Sambhaji for treason). The stories of these traditional Maratha women make for fascinating reading.By now you must be wondering why we are on this convoluted journey from Gandhi Bazaar to Kolhapur. Hold on. All will be revealed presently. 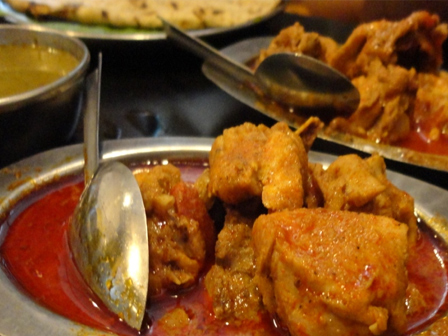 Traditional Kolhapuri masala is usually a blend of over 56 secret masalas which are ground together to give Kolhapuri cuisine its unique flavour. The spicy red Chicken Curry here is rustic and un-pretentiousness. It is served with a cucumber, yoghurt, onion and green chilly Katchumbar. It’s earthy. The kind that is made by a proper cook and not a chef. It is true to itself and devoid of  flourishes, ornamentation or fanciful experimentation that can often take a dish away from its true nature. It meets with our unanimous approval. The Chapatti’s arrive. They are not `phulkas’ but the popular variety eaten around these parts that are basted lightly with oil, becoming what I personally call a `Chaparathi ‘ ( a chapatti with a bit of paratha in it ! ). My Egg Biriyani is apparently on the way. 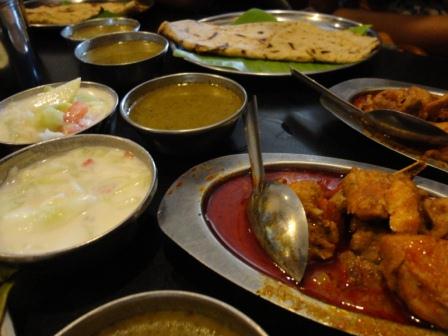 A table flooded with food ! But the portions are good for only one.

Looking around this small, approximately 8’ x 20’ space filled with serious eaters, I imagine that Bangalore would have been equally small when in 1638, the Bijapur Sultan’s army, led by Ranadullah Khan and Shahaji Raje Bhonsle marched in to defeat Kempegowda III (who moved to Magadi and established the alternate line of Magadi rulers). A pleased Mohammed Adil Shah gifted Bangalore to his Farzand (an extremely high status) Shahaji Bhonsle as a `jagir’ and he settled here to rule over Bangalore and marry Tuka Bai. His wife Jijabai and son, Shivaji  Bhonsle, went to live in Pune where young Shivaji  grew up to marry Sai Bai from the Nimbalkar family in 1640. Shahaji was unable to make it to the wedding, so Jija Bai and Shivaji journeyed to visit him in Bangalore, while Sai Bai went home to Phaltan for a short visit. While here, Tuka Bai (a Mohite ) convinced Shivaji that he could also marry her niece, the beautiful Soyara Bai, to please his father who was unable to attend the first wedding. Jija Bai was unhappy at this sudden turn of events, but the wedding was solemnised nevertheless, and Shivaji left Bangalore with yet another bashful new bride.* 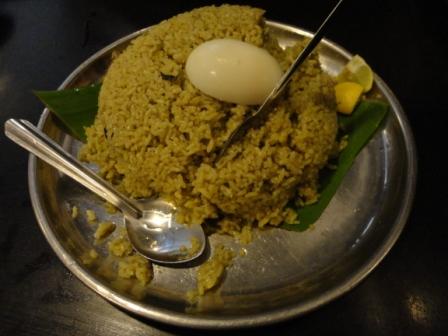 My Egg Biriyani arrives, accompanied by a little steel katori containing a gravy  akin to, but not really the original Pandhra Rassa (mutton broth).  I can taste `garam masala’  in the rice. The biriyani is not as spicy as I would have liked it to be, but then, since the ubiquitous biriyani has so many versions across the Deccan with each region adding to it their own robust, local flavour and ingredients, this is not a fatal flaw. Speaking of the Deccan, it was evidently quite a hot bed of activity during the 17th-18th centuries with the British, the Bijapur Sultans, the Nizam of Golconda and the French all tripping over each other trying to pursue their private ambitions here! 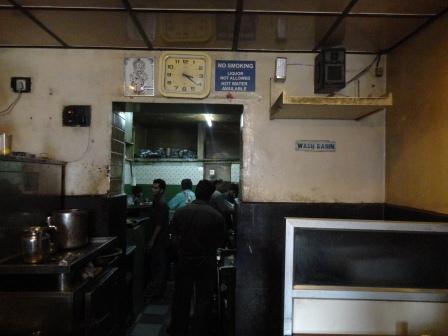 Its a very basic place, so go prepared

After Shahaji’s demise in 1664 at Hoddigere ( Shimoga district) , his son Venkoji  (from Tuka Bai ), inherited the Bangalore jagir, but instead, went further South to establish an independent line of Maratha rulers in Tanjavur! It then passed on to the Mughals (Kasim Khan) who sold it to Chikkadevarja Wodeyar. It then passed onto Hyder Ali  and the rest is history. Thereafter, the Maratha presence in Karnataka was intermittent, with Tipu fighting the British (aligned with the Marathas and the Nizam) through a series of intense Anglo Mysore Wars, till his demise in 1799. At this point, our meal also seems to be coming to an end. Rasam is served. Rasam ? Here ? I have a sneaky suspicion that this is an outcome of the eventual hybridisation unique to all urban environments. Unfortunately, it needs a little `dum’.

The staple Kolhapuri Taat and Misal are missing, but this little space does not claim to serve authentic Kolhapuri cuisine. But food as we know, traverses across time and space,  recreating memories  and stimulating new ones. It is a powerful connection with our core –  our sense of culture, religion, family and personal identity. For Kollapuri Ramusa, it might have been a connect to his hometown and a way of preserving his identity in this massive metropolis. * Kollapuri’s is at #1, Corporation Building, Gandhi Bazaar Main Road, Opp Bookworld. All portions are good for one person only. Biriyani is shareable. * References to Shivaji’s wedding to Soyara Bai from : Shivaji The Great – VD Katamble